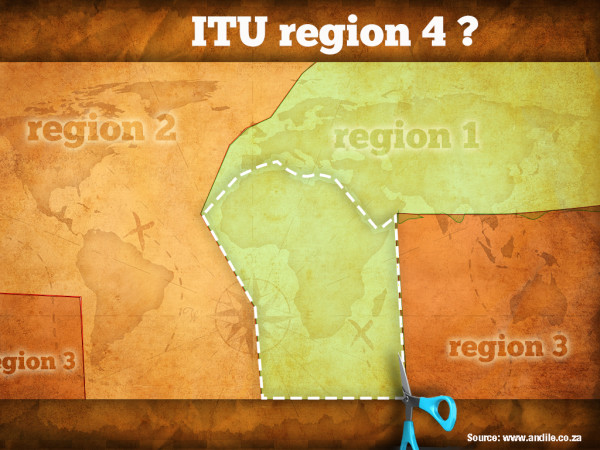 How to Address the Challenges Facing the Internet in Africa: ITU Region 4

Africa will have 2,4 billion people by 2050 being the second largest continent on Earth. Much has been written about the development of telecommunications, and particularly about the Internet in Africa. Notwithstanding the often-cited economic and technical reasons for the underdevelopment of the Internet on the Continent, the allocation and use of space frequencies and orbital slots for delivery of Internet services, which is a significant impediment to broadband deployment, remains under researched. In addition, the application of spectrum to deliver broadband services is very different for densely populated European markets and sparsely populated (largely rural) African markets. Without an equitable International Telecommunications Union (ITU) system to coordinate use of orbital slots, space frequencies, and spectrum in general individualised and self-interested decision-making will eventually continue deplete this common resource to the detriment of African countries, and other post colonial states. It is well documented that the current regulatory framework and policy mechanisms favour incumbent international operators in terms of access to space frequencies and orbital slots, while Africa remains a major consumer of satellite capacity (particularly for cellular backhaul and broadband Internet services) due to the continent’s size and terrain. In addition, there is a need for the establishment of a new region 4 at the ITU tasked with addressing Africa’s pressing issues, and legitimate claims to address exclusion from these critical resources.

To ensure South Africa, and indeed the Continent’s, effective participation in the Internet economy and equitable access to scarce global resources a significant overhaul of current governance structures and organisational arrangements is required. The replication of asymmetric global power relations in multilateral organisations tasked with radio communication frequency regulation, namely the International Telecommunications Union (ITU), further compounds the plight of Internetlessness experienced on the Continent. Addressing the challenges of affordable and effective broadband connectivity cannot be avoided in a discussion of African Internet access.

Africa is a vast continent totaling more than 30 million square kilometres in landmass with relatively low population densities, and as such requires the use of satellites and other wireless connectivity solutions to reach far-flung rural areas for connectivity and backhaul as the deployment of fibre and other terrestrial infrastructure is not economically or technically viable. However, these satellite systems depend on two critical regulatory resources to operate: orbital slots and spectrum. Spectrum remains the lifeblood of satellite communications and needs to be used more efficiently.[1] As frequency spectrum is a finite natural resource, it has to be used fairly and equitably. However, the coordination of collective space use requires a significant change in the ITU. Although arguments in favour of cooperation have not significantly changed since the beginning of the Space Age (remaining grounded in scientific, economic, political and security issues), the nature and scope of space activity has changed in recent years. The global problem is not just an absence of structure or coordination, but also one of an absence of legitimacy.

Humanity has reached a critical juncture: create the right institutional and operational resources immediately, or enter a trajectory that will be progressively difficult to escape.[2] It is well documented that the current regulatory framework and policy mechanisms favour incumbent international operators (Intelsat, Eutelsat and others) in terms of access to space frequencies and orbital slots, while Africa remains a major consumer of satellite capacity (particularly for cellular backhaul and broadband Internet services) due to the Continent’s size and terrain. Very few of Africa’s mobile and fixed operators, Internet service providers and entrepreneurs have access to these orbital slots and space frequencies, and African operators are forced to use international satellite operators, based in the US, Europe or Asia. This partially explains the high cost to communicate on the Continent. It is evident that a review and reassessment of the process and policy being pursued by the International Telecommunications Union (ITU) in the allocation of space frequencies and orbital slots, is long overdue and required as a matter of urgency. 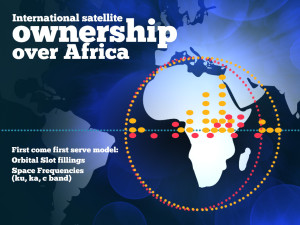 The current arrangements as defined by the ITU for the allocation of space based resources both orbital slots and space frequencies is done on a principle of first-come-first-served. This principle was embedded in ITU resolution and final acts in the early 1960s. Africa was not part of global discussion due to most African countries still being subject to colonial rule. This resolution has and continues to deprive Africa of its ability to participate meaningfully in satellite communications services. This situation results in a lack of access to these important resources and an uneven environment in the global communications ecosystem.

The current C-Band coverage of Africa reflects this reality.  Africa is a major user of C-Band capacity in Region One of the ITU, however has limited or no ownership of satellite systems delivering these services across the Continent.

The widescale application of this satellite service on the African continent is due to the need to address the following physical constraints: (i) sheer size of the landmass of the African Continent; (ii) the relatively low population densities; and (iii) the need for rural connectivity. Paradoxically, European and other international satellite operators own almost all C-Band transponders available in Region One. The implications of this situation is that fixed, mobile and Internet operators on the African continent have to lease C-Band satellite capacity to deliver broadband services to geographically isolated areas.  In essence every African rural to rural call or every rural to urban call is either dollar or euro currency denominated.

In parallel, the interests and requirements of Europe (being the largest economy in this region) largely drive the application and adoption of various spectrum bands by the ITU for Africa. In many instances, the application and prioritisation of spectrum bands are then applied across the region and priorities given to requirements for throughput in densely populated areas (the reality facing Europe) as opposed to the needs of Africa requiring wide-scale population and geographic coverage at lower costs. This is clearly illustrated by the following statistics:

A case in point is the allocation and application of the 450MHz to 690 MHz spectrum resources. This spectrum range is critical to African rural communications needs as the lower frequency ranges offer greater coverage at lower cost points. Broadcasters currently use these lower frequency bands and need to be migrated to other bands. While Europe needs are best served by higher frequency range which offers them greater throughput in more concentrated geographic areas. The question that Africa has to answer is: where is African digital broadcasting services and rural communications best served?

In the recent past Europe has published a number of papers arguing that 450Mhz to 690Mhz is not urgently needed by Europe. They propose that these frequency ranges should only be used for communications in 2030. The reason for Europe’s proposal is due to their current infrastructure and communications needs not being aligned with Africa’s rural connectivity needs.

The nett result of these developments is that African communications traffic continues to be routed via Europe.  This results in many cases that communications between neighbouring African countries are often routed first via Europe (e.g. via France, UK or Portugal) before being routed back. This tromboning of traffic through Europe is being entrenched by the satellite ownership dynamics. This also results in a significant leakage of foreign currency to fuel Africa’s growth in communications and broadband adoption.

In addition, critical to Africa’s continued growth in the communications environment is for it to consider and apply mechanisms that allow for the most efficient allocation of spectrum resources.  As we increase the numbers of connected devices requiring communications (mostly wireless), we will need increased amounts of spectrum. This development of the Internet of Things (IoT) is critical to the future of a modern economy and Africa needs to adopt this as it has done with mobile communications.  The technical mechanism to achieve this could be dynamic spectrum assignment as has been successfully demonstrated in trials undertaken by various countries as TV white spaces trials.  The outcome of these trials indicate that it is possible to manage spectrum on a use basis as opposed to the traditional process of ensuring protected dedicated spectrum bands being provided to different operators for their intended use. This means that spectrum will need to be allocated as needed and for current use, not for future intended use as currently is the case. A number of technology providers are emerging that are producing the required technologies to facilitate this dynamic spectrum assignment.

In conclusion, it is imperative that a new Region 4 be established in the ITU, for the African continent. This region would be distinct from Europe, as Europe’s interests are not aligned with Africa’s in the determination of standards, the allocation of frequencies and the deployment of communications infrastructure. This arrangement will enable a more equitable use of limited global resources as well as ensuring that the needs of Africa are being addressed as opposed to the current arrangements in Group One. There is an urgent need for an engagement between the African Union, European Union and United Nations on this matter.

[2] Wolfgang Rathgeber, The Fair and Responsible Use of Space: An International Perspective