The Digital Switch Over and Africa’s 17th of June Deadline

The International Telecommunications Union (ITU), an agency of the United Nations, coordinates the frequency spectrum band allocations for the purpose of optimizing spectrum usage and the reduction of interferences. In 2006, in Geneva, an agreement was reached that the region consisting of Africa, the Middle East (up to Iran) and Europe (including Russia) would switch off analogue television services and migrate to Digital Terrestrial Television (DTT) by the 17th of June 2015. The opportunity that this switch-over would create is the freeing up of spectrum in the 700 and 800MHz bands, commonly known as the “digital dividend”. The next deadline agreed in Geneva in 2006 was for the 17th of June 2020, when the countries that requested an extension would be required to switch to using the VHF2 band.

So have the countries in this region switched to DTT? Yes, in Europe all analogue broadcasting has been switched off due to an agreement between all the European states.

In Africa, the DTT transition is varied, with very few countries having switched off their analogue signal. Some of the factors to be taken in consideration in analyzing why the transition took place in the other regions, like Europe, and not in Africa, include the fact that in Africa, the VHF band is often used more for TV broadcasting than the UHF band. You also cannot compare TV penetration in Africa with that of Europe because of the low number of households that possess TV sets in Africa, and because of the very high use of satellite and cable within some African countries. If one removes Nigeria and South Africa from Africa, the total number of households affected by switching off analogue terrestrial broadcasting would be less than 40 million for the whole of Sub-Saharan Africa which is less than France and Spain combined.

The following map depicts the progress that the different countries in Africa have achieved with respect to the digital switch over. 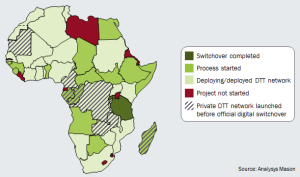 Should Africa be concerned about missing the deadline? Well it should be noted firstly that African countries have a less pressing need, than the European ones to use the UHF band for mobile telecoms services, and that the Digital Switch Over is a very important project for the audiovisual sector for the next decades so states should not act impulsively in implementing it. With this being said, it is also essential to stress the importance of the need for proper development and implementation plans for the transition but no, it is not too late to rethink and reshape the state of the audiovisual sector on the continent.